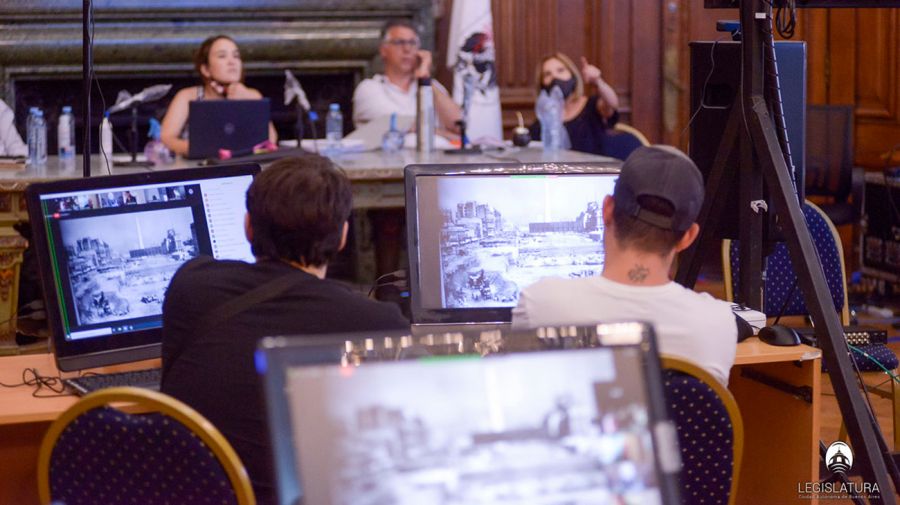 Punta Carrasco and Costa Salguero are 32 hectares of coastal grounds that run along the northeastern part of Buenos Aires City. During most of the 20th century the area was open to the public and the sight of thousands of citizens basking in the sun and bathing in the waters of the River Plate was not uncommon. But the growing contamination of the surroundings and the leasing of land to private entities began acting as urban barriers to a City that was already turning its back to the world’s widest river.

During the administration of former president Carlos Menem (1989-1999) the public-owned Costa Salguero was parcelled up and leased to private entities who placed discos, nightclubs, golf courses, offices, and a huge convention centre with parking for 2,000 cars, consolidating an urban scar that divides Buenos Aires from the coast. With the lease coming to an end in 2021, the City government led by Mayor Horacio Rodríguez Larreta announced a new development project for the area, drawing strong criticism from urban specialists, neighbours’ associations and environmental groups.

In April this year, at the height of the coronavirus pandemic, the government launched an architectural competition to choose the best concept for the area. The rules stated that at least 65 percent of Costa Salguero was to be left for public use, meaning that the City had to change the area’s zoning from 100-percent public park to up to 35 percent buildable area.

This re-zoning proposal was discussed at the City Legislature on October 8, where it was won preliminary approval on a vote of 37-23. The joint opposition voted against, while the ruling Vamos Juntos party and its allies of Martín Lousteau’s UCR-Evolución and the Socialist party of Roy Cortina supported the bill.

According to the Rodríguez Larreta administration, the project intends to “restore the city’s relationship with the river” and take back almost 14 hectares of green spaces that are now occupied by private leaseholds, with the remaining public lands being sold to private developers. The ruling coalition said proceedings from the sale would be devoted to the fight against the Covid-19 pandemic.

“We don’t need to thank the ruling coalition for coming up with a bill that would leave 65 percent of green spaces. We need to demand they do not sell public lands or auction off the coast,” replied Marta Martínez from the opposition bloc Autodeterminación y Libertad.

One of the City government’s main arguments is that creating a huge park would not make the best use of the coastal grounds that are about to become available.

“Exclusive use zoning is unsustainable,” argues the City’s Transport Secretary Juan José Méndez. “Isolated parks that only provide the environmental function of parklands but lack other social uses are mostly used on Saturdays and Sundays but otherwise remain empty… We only feel safe at them at very specific times on weekends.”

Offering a wide range of mixed-used services will help the park to be occupied virtually around the clock, the official added.

“Success stories are those who take into account environmental quality but also some kind of guarantee of public safety, and Costa Salguero offers a huge opportunity to design a space which combines profitability on both a social and economic level,” said architect Alberto Gorbatt, the director of the ARQA platform. He argued the projected commercial and services areas are similar to Barcelona’s Olympic Villa, the Port of Sydney and the People’s Park in Copenhagen.

Other experts beg to differ.

“It has been argued that the public sphere is unsafe and that in order to have an active and safe city the sine qua non condition is to sell off public lands to locate residences, hotels and retail,” protested architect Mariana Giusti, a master in Urban Studies from the Universities of Seville and Lisbon. “This only fuels social segregation and urban fragmentation.”

María Gabriela Mataloni, a biologist from the University of Buenos Aires, said parks don’t need to be active 24 hours in order to perform important functions.

“A park wholly devoted to public and free use can provide educational and recreational experiences and will fulfill the key function of adaptation and mitigation to climate change,” said Mataolini, adding that such green spaces can contribute to the capture of carbon dioxide from the atmosphere, protect people and infrastructure from increasingly severe storms and play a role as a reserve for biodiversity.

“The City government considers nature and green areas a vacuum to be filled with business,” slammed environmental lawyer Enrique Viale. “They are turning citizens into customers, privatising leisure and recreation. They’re telling us there’s no enjoyment without consumption.”

A ghetto of wealth?

Another point of contention is the height of buildings and the social profile of those who will purchase the apartments. While the original bill approved in 2018 said structures in Costa Salguero could be as tall as 12 metres high, the re-zoning plan voted in October allows for buildings of up to 29 metres — some nine or ten stories.

Some urban planners pointed out that the renders presented by Franck-Menichetti, the winning architectural firm, showed more amicable heights that did not correspond with what the bill allows developers to build.

“Just to be clear: the proposed buildings will be located between Costanera Avenue and the River Plate, like a wall that would close off the possibility of a direct and sincere relationship with the coast,” said architect Rosa Aboy, the director of the Research Centre for the History of Dwellings at the University of Buenos Aires.

“I must remind you that we’re not voting for render visualisations but what the letter of the law says,” said architect Silvana Parentella of the R2b1 firm. She also warned that the bill allows for the construction of buildings in the neighbouring grounds of Punta Carrasco.

Gabriel Lanfranchi, the coordinator of the City’s Urban Environmental Plan (PUA), was generally supportive of the project but warned against elitist approaches, saying the government should enact some kind of instrument that would facilitate access to housing in order to avoid a new Puerto Madero “where apartments are only available for the elite that can afford them.” Local authorities, Lanfranchi argued, should intervene in this new area to guarantee social mix regardless of what the market delivers.

“I don’t see this debate taking place,” he said.

Victoria Roldán Mendez, the chair of the Urban Development Committee at the City Legislature, declined to comment until the hearings have concluded. “We’re halfway through this process and neighbours are still commenting on the project on the bill or making contributions to the debate,” a spokeswoman for Roldán Mendez told the Times. 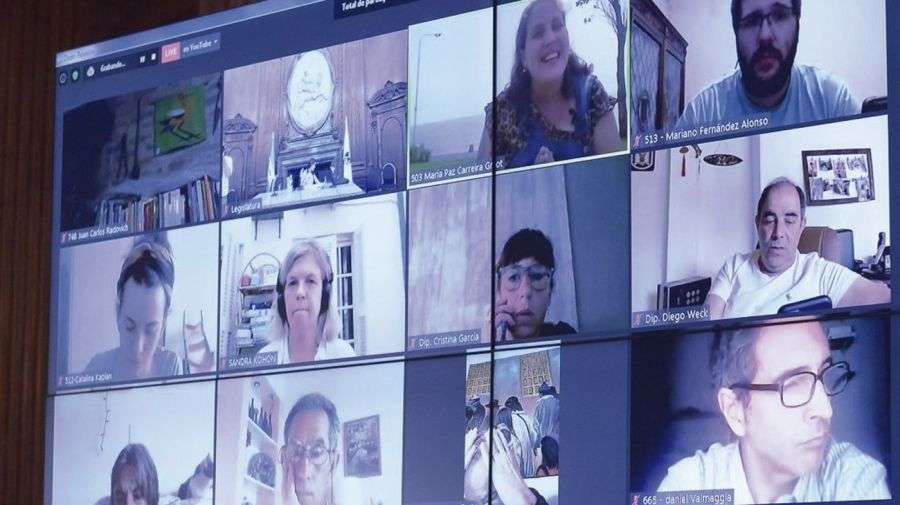 To complicate things further, an appeals court already suspended the sale approved in 2019 (a prerequisite to move forward with the re-zoning), arguing the move could be at odds “with the constitutional proceedings established for the sale of public domain lands.”

The ruling, made known in October, recalled that the Costa Salguero coastal grounds enjoyed “special protection” from the Urban Environmental Plan, made into law in 2008, which calls “for the provision of public use to the public-owned land by the riverbank.”

A month later, the ANAC national civil aviation agency sent an official note to the Rodríguez Larreta administration claiming the Distrito Joven project was “a threat to aviation safety,” due to its proximity to Aeroparque airport.

“Local authorities should be warned about the risk posed to third parties by the building of housing complexes… in areas near the runway headers,” said ANAC.

The City’s Urban Development Minister Álvaro García Resta dismissed the statement as a “technical debate” that will be revised by the experts in charge of the development, suggesting “some obvious political subtext” that comes amid heated exchanges between the national administration of President Alberto Fernández and the Mayor Rodríguez Larreta’s government.

“I’m fairly surprised that the high-ranking government officials who defended the privatisation did not argue in favour of the constitutional nature of the project, taking into account that the issue has been brought up by many and that a recent ruling suspended the sale of these terrains,” said human rights activist Eduardo Jozami.

Urban planning consultant Andrés Borthagaray, who headed the City’s Strategic Planning Council from 2006 to 2014, regretted that the official plan for the area is likely to create a definitive barrier between the City and the river.

“It’s true that the City is in debt, with compromised finances and pressing social priorities, but moving forward with a re-zoning process in order to sell an irreplaceable asset is inadmissible,” Borthagaray said. “There are several other options to allocate investments with the same expected revenues that can be done within the law.”

Public hearings will continue until January 27, but all eyes are now on the second round of voting that will decide the fate of the government-sponsored project. If lawmakers vote the same way they did on October 8, then the government would have enough votes to pass the proposal.

But everything could change if the mayor’s allies UCR-Evolución (nine lawmakers) and the Socialist party (two lawmakers) change their vote in the face of the increasingly mobilised and vocal opposition to the project. Will they? A widely shared viral video from 2018 shows Lousteau criticising Rodríguez Larreta’s policy of selling public assets for cash, months before he joined the ruling party’s coalition.

“Anything Larreta wants, he just buys it. And anything he can sell, in terms of real estate, he just sells it,” Lousteau told TV host Alejandro Fantino. Opponents of rezoning are using the video to prove that his bloc should be opposing the sell off of public assets — and must therefore reconsider their positions.

The former mayoral candidate, now a senator for the Vamos Juntos ruling coalition, is taking a more benevolent view of the project.

“I saw the project, it seems way better of what’s there today,” Lousteau said in a radio interview this month. “It will be up to the lawmakers, and to what happens in the audiences, to settle the matter.”

In the meantime, the public hearings will go on and his name is likely to be a trending topic again.

Changes to the Distrito Joven were made midway through

The government plans for Costa Salguero came two years later after a bill approved by the local legislature that created the ‘Distrito Joven’ (“Youth District”), with the goal of turning the northern part of the City’s riverfront, from Núñez to Palermo, into a recreation and nightlife area.

With the proposed aim to integrate a long stretch of the riverfront into the capital, the government’s intention was to allow a certain percentage in each lot to be a buildable area, with one-third of space assigned for clubs, bars, and restaurants. It divided the coast of Buenos Aires in five sectors, the fifth being the Costa Salguero coastal grounds.

“In the Costa Salguero area, the law allowed the construction of buildings of up to 12 metres high, premises were to be let under a lease and subdivisions were not allowed,” said Magdalena Eggers, an architect specialised in laws and regulations.

But the City government changed the rules of the game midway through, says Eggers.

“Now the maximum height in Sector Five is set as 18 to 29 metres. And it makes provision for subdivisions to be staged,” she said.

Moreover, for the re-zoning proposal even to be discussed, the Rodríguez Larreta administration hurried the approval of a bill that allowed the sale of a portion of the Costa Salguero grounds, which was passed in December of last year thanks to the government’s own majority in the City Legislature. The entire opposition voted against.